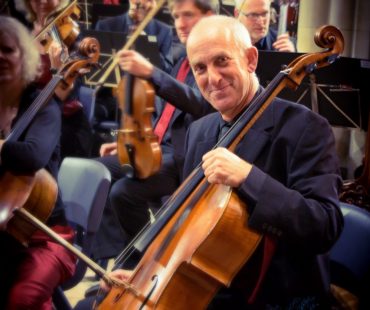 SEBASTIAN COMBERTI was born in London and studied in Italy with Amedeo Baldovino and later with Derek Simpson and Sidney Griller at the Royal Academy of Music.

Sebasian was a founder member of the Bochmann Quartet until 1983 when he became principal cello with the London Mozart Players, a position he continues to hold.

A keen interest in historically informed performance has resulted in participation with a great many of London’s period instrument groups, appearing as principal cello and soloist with the Orchestra of the Age of Enlightenment and the Hanover Band.

As a member of several chamber groups, including Trio Goya and Divertimenti Ensemble he has recorded for CRD, EMI, Harmonia Mundi, Hyperion, Meridian, Phoenix and RCA and CPO.

In April 2001 Sebastian founded the Cd label Cello Classics, devoted to recordings of rare repertoire and historical recordings, himself releasing several CDs of sonatas by Boccherini, Stephen Paxton, early 19th Century works with fortepiano, and concertos by Haydn and Zumsteeg with the OAE.